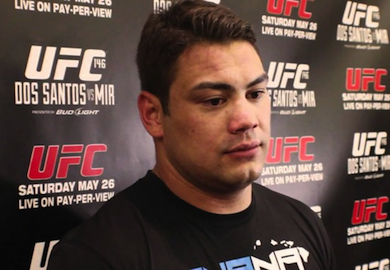 Rob Emerson is scheduled to face Joe Taimanglo at Bellator 116 this upcoming Saturday on the preliminary portion of the card. Emerson has been making the media rounds and made a stunning statement in the middle of an interview with MMAJunkie. Emerson believes that UFC flyweight Ian McCall is indirectly responsible for Shane Del Rosario’s death.

“That kid won’t fight me. I’ll end his career if I fight him. I wouldn’t just beat him— I’d end his career… Like I said, Shane [Del Rosario] was my best friend. We were all friends. There’s a lot of facts and stuff I’m not going to bring up but I hold him indirectly responsible for what happened to Shane.”

Ian McCall discovered Shane del Rosario’s unconscious body in their shared apartment back in December 2013. It was confirmed that Rosario had passed due to natural causes (anoxic encephalopathy and Long QT Syndrome). However, it was later announced after the toxicology that there were traces of drugs in Rosario’s system.

Was Rob Emerson out of line for saying this in a public forum?