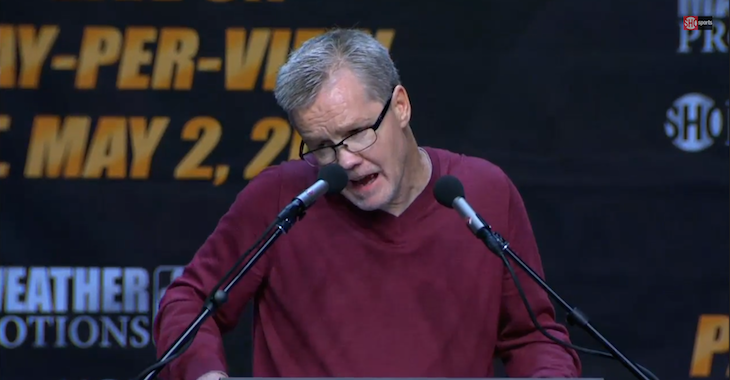 “Mayweather is a different ‘A side’ now and you can guess what the ‘A’ stands for. He was late for his media workout leaving major media outlets scheduled to go live with dead air. How selfish is that? It doesn’t take a lot to figure out why everyone is rooting for Manny. Just look at which fighter has the most endorsements going into this fight and why. When Manny beats Mayweather, it won’t only be about unifying the welterweight titles, it will also be a public service to boxing. I am so glad that Mayweather is big on Shots [a social media Mayweather uses] because he is going to be taking a lot of them from Manny on May 2. That is why he has been avoiding Manny for so long. He didn’t want this fight. He can pretend it was a strategy to build up the fight’s value but that’s not true. For once, Mayweather wasn’t able to handpick his opponent. He was forced to take this fight — by Manny, the media, and the fans.”

Freddie Roach was none too happy with Floyd Mayweather for showing up to his open workout and media day two hours late, earlier this week.

The legendary boxing coach dressed Floyd Mayweather down and claimed that Manny Pacquiao was prepared to put him in his place. Pacquiao held an open workout earlier today to show off what he has in store for Mayweather.

Floyd Mayweather and Manny Pacquiao will finally meet in the ring on May 2 at the MGM Grand in Las Vegas, Nevada.

BJPENN.COM IS YOUR #1 DESTINATION FOR ‘PACQUIAO vs. MAYWEATHER’ COVERAGE!