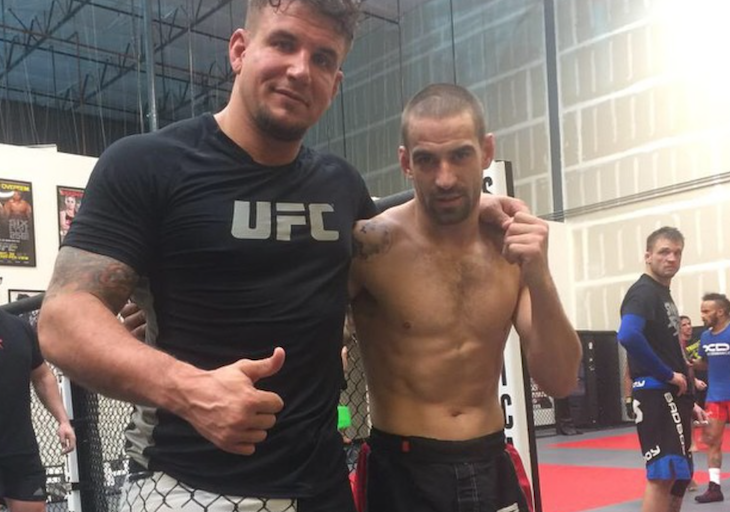 Later this month, Lou Neglia’s Ring Of Combat 50 will go down from Atlantic City New Jersey.

It was announced earlier this week via a press release, that the event will be sold on cable TV as a Pay-Per View.

GoFight Live (www.gfl.tv), the world’s premier online destination for live combat sports, announced today that it has partnered with legendary world champion Lou Neglia’s Ring of Combat, which has sent over 90 professional fighters to the UFC, to bring the promotion’s historic, 50th Mixed Martial Arts (MMA) event featuring seven championship bouts, to live pay-per-view television as well as to a live global audience on GFL.tv, on Fri., Jan. 23, from the Tropicana Resort & Casino in Atlantic City, N.J.

“We are thrilled to team up with GoFight Live, which gives us the opportunity to showcase this event – a major milestone for Ring of Combat – to fight fans all over the globe,” said Neglia, whose organization has been touted by MixedMartialArts.com as “The American Idol of MMA” because of its unmatched track record of discovering future superstars of the sport.

Frankie Perez, a nine-time Ring of Combat veteran who was originally slated to compete on the upcoming 50th event, withdrew from his scheduled title fight after being called up to make his UFC debut on Jan. 18.

Amongst the crop of rising stars that are slated for action at Ring of Combat 50 and that have been touted as potential, future UFC competitors are undefeated Ring of Combat national bantamweight (135 pounds) champion Julio Arce (6-0) of Queens, N.Y., who will put his title on the line in the co-main event against battle-tested Thomas Vasquez (7-2) of Horn Lake, Miss., and undefeated, former NCAA Division I wrestling champion and four-time All- American for Edinboro University Gregor Gillespie (3-0) of Wantagh, N.Y., who will square off with Justin Stewart (0=0) of Greene, N.Y. in one of the pay-per-view pre-show matchups on GFL.tv.

Since making his professional debut at Ring of Combat 45 on June 14, 2013 with a blistering first round (2:45) TKO (punches) of Fikret Darzanoff, the 27-year-old Bamgbose has been unstoppable, continuing his dominant success with two more first round stoppages – a TKO (punches) of Michael Elshamy on Jan. 24, 2014, and a TKO (doctor stoppage) of Steve Nichols on Sept. 19, 2014 – both in Ring of Combat action.

A Jamaican import, the 24-year-old Brown made his professional debut under the Ring of Combat banner on May 16, 2014, submitting Steve Tyrrell with an armbar in the first round (1:53) of their meeting. On Sept. 19, 2014, Brown turned in another powerful performance, finishing Leonard Simpson by way of second round (:52) TKO with a barrage of punches.

Brown will face his toughest test to date in Winters, a veteran of more than five times as many fights than Brown. Winters has yet to be finished by an opponent since making his professional debut in 2010, and reeling off wins in his first four starts – three by way of TKO.

Rizzo is coming off a brilliant first round (3:40) submission (rear-naked choke) of Jimmy Grant at Ring of Combat 49 on Sept. 19, 2014, avenging a KO (punch) defeat at the hands of Grant, just one fight before that, on May 16, 2014. Prior to the loss, Rizzo had collected four straight wins – three via first round submission.

Phillipe “The Filipino Assassin” Nover (8-5) of Brooklyn, N.Y. will square off against Dan Cion (4-1) of Farmingdale, N.Y. for the Ring of Combat East Coast lightweight title.

Nover, 30, is aiming for his third consecutive win, after earning back-to-back unanimous decisions over Darrell Horcher and Mike Santiago on April 4, 2013 and June 14, 2013, respectively. The victory over Horcher represented Nover’s final start of a 2-1 stint fighting for Bellator.

Cion, also 30 years of age, is looking for his second straight win in what will be his first appearance since June 1, 2012 when he decimated Casey Milliken in just 18 seconds with an onslaught of punches.

Tickets for Ring of Combat 50, priced from $55 to $135, can be purchased online at RingofCombat.com, the Tropicana Resort & Casino box office and Ticketmaster.com.