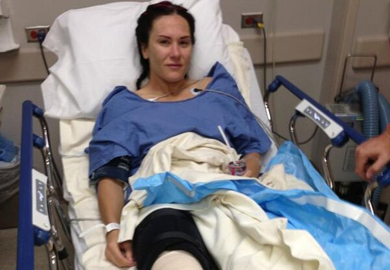 Top female bantamweight fighter, Cat Zingano, was supposed to follow-up her UFC debut with a coaching stint on TUF and a title fight against Ronda Rousey.

Shortly after her third round destruction of Miesha Tate, the female fighter was forced on the shelf with a knee injury and his been rehabbing ever since.

Cat recently posted a video on her facebook page detailing a possible new injury on her other knee.

“Cat is now three months out from her right knee anterior cruciate ligament reconstruction,” he stated in a video Zingano posted on her Facebook page. “She’s three months out; her knee looks great. She’s got almost perfect motion, she’s got great strength, she’s got excellent stability. She’s about three months from getting back in the ring and starting to spar.”

“The only problem is the left knee appears to have somewhere along the line gotten into trouble with a medial meniscus tear,” said Dr. Kvitne. “So we’ll confirm that today with an MRI. If she does may have a torn meniscus, she’ll need surgery fairly quickly, so she can get back on track with the rehab.”