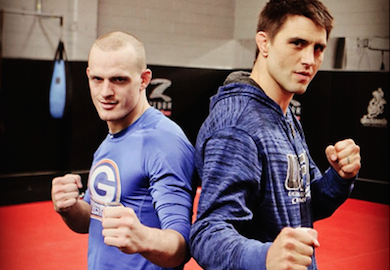 …“All of a sudden this guy comes busting through the door and he’s like losing his mind. There’s no way this man would survive in a zombie apocalypse,” Lundell said. “He’s screaming, ‘Is there a phone? I don’t know what to do!’ He asked if either Lundell or Prace knew CPR. The man explained, ‘There’s a man outside. I think he’s dead.’”

Immediately, they went towards the crowd. Prace moved people out of the way, so Lundell could get into the middle where the lifeless man lay. The man’s wife and child were in the back seat of their car watching everything unfold. The woman spoke no English and was trying to calm their child.

“I go over there and nobody’s touching this man, like nobody knows what to do,” Lundell stated. “There’s all these people around him and nobody has any idea what to do. All of sudden the guy’s like ‘I’ve got 9-1-1 on the phone, she says we need to do CPR.’”

Lundell attributed Prace’s composure to his military background and his own to his involvement in various competitions.

“I actually think it played a part, but it was nothing like anything I’d seen in the cage. You know when somebody gets knocked out and they go stiff, but you can tell they’re alive? When we got to this man, he was on his back, arms flailed out like he had just fallen, gas like on the ground all over next to him because he had just fallen putting in the gas pump, and he was the whitest person I’d ever seen. He had like skin tone that looked like he would be tan normally, but he was whiter than white…and he had the deadest eyes I’d ever seen, fully dilated out. I couldn’t see anything.”

“For the first three minutes, nothing happened to this guy. He just stayed laying there and the girl over the phone was like ‘You guys keeping going. Every second helps.’ And so we keep going and it was minute after minute. All of a sudden by like the fifth minute, he started doing this weird yawning. It looked like he was yawning, but nothing was happening. He was yawning, but no air was moving. He would stop for like 10 seconds and I’m beating, and all of a sudden he would do this weird yawn, like he was trying to breathe, but nothing was happening.”

Lundell continued to apply compressions. What seemed like minutes later, he noticed color returned to the man’s face and his eyes were coming back normal. Lundell looked up as he heard the ambulance coming, but the vehicle mistakenly passed them and continued down the road. The man with the cell phone went chasing the vehicle down to signal them back.

Lundell admitted that once the paramedics arrived on the scene, he was somewhat distraught about entrusting him to them. He soon let go of the emotional connection he’d formed in the midst of the intensity and realized the man would be in good hands and most importantly, would live another day.

But had it not been for their efforts, the end result could have been a much different story.