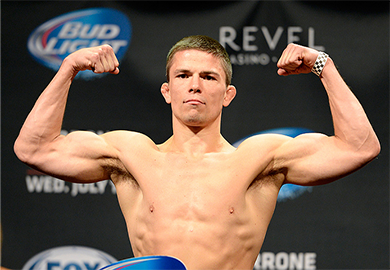 Rick Story is coming off a win against Gunnar Nelson yesterday at UFC Fight Night Stockholm, however that doesn’t mean he’s content with his situation.

Story spoke to MMAJunkie about his win, and what he wants to do next.

“At this point, every performance is going to be one of the most important for my career. Trying to get up to the title shot, you can’t take any bumps in the road. I can’t take any more losses. I’ve lost too many times, and it’s hard every single time, so it’s just easier to win.”

Story admitted that he, like many, was shocked when the judges decision was read, and the first judge scored the bout 48-47 for Gunnar Nelson.

“When I first heard it, I was shocked. The first thing that ran through my mind was Mike Pyle and Kelvin Gastelum. The Mike Pyle fight, I thought I won, but I didn’t. And then the Gastelum fight, that was really close. I’m happy with what happened in that fight. I was happy with my performance. But in my head, it shouldn’t have been a rocky road. I should be on like a five-fight winning streak right now.

“So when the first scoring was called, I just didn’t want the thing to happen. I knew in my head that I had to have won, but with some of the judging, it’s never certain.”

Fortunately for Story, the remaining two judges scored the bout in his favor, giving him the split-decision victory.

“Over the last couple years, after my losses, it seems like the next fight was always going to be the run for the title. But I really do think that I’m in the right place, and I have the motivation to go in.

“There’s no sense in training in this sport and doing it and fighting at this level if I’m not going for the world title. So my goal is to be the world champion, and I’m going to do whatever it takes to get there.”

“I always seem to be the underdog and the under-spoken fighter. Nobody really knows. They always say, ‘Yeah, he’s tough,’ but they always count me out. It’s not a huge motivational factor, but it’s always kind of fun in a sense, putting everybody that talks down on me to shame.”