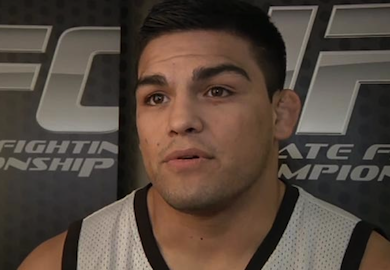 Yet another welterweight bout has been added to the UFC 171 card. Rick Story and Kelvin Gastelum have officially been penciled in for the event and they will duke it out in Dallas, Texas on March 15, 2014.

Rick Story recently put on an impressive performance in route to a unanimous decision victory against Brian Ebersole at UFC 167. The bout was one sided and saw Story control where most of the fight went. Rick Story is looking to return to the form of his old self when he was walking into the octagon and defeating names like Thiago Alves and Johny Hendricks. Although that was a long time ago, Story is still young, learning and improving every single time he steps into the octagon.

Speaking of young, twenty-two year old Kelvin Gastelum is undefeated in his mixed martial arts career. Despite winning ‘The Ultimate Fighter Season 17’ winner as a middleweight, he opted to drop down to the welterweight division for his time with the UFC. Gastelum made his welterweight debut in August defeating Brian Melancon with a rear naked choke in under three minutes.

UFC 171 is headlined by a bout for the vacant UFC Welterweight Championship between Johny Hendricks and Robbie Lawler.