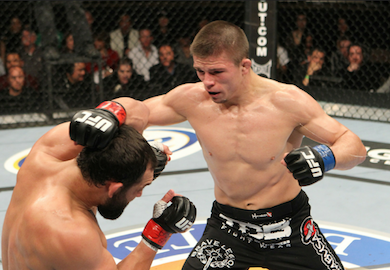 UFC welterweight, Rick ‘The Horror’ Story is the only man to defeat the UFC’s number one welterweight contender, Johny Hendricks. He’s also a former training partner.

Story, is now helping the champ, GSP train for his UFC 167 showdown with Hendricks.

“It’s a plus for me,” St-Pierre told the French-Canadian media. “He’s a guy with a similar style to Johny Hendricks. He’s also the last person to beat him. He won by decision. It was a close fight. But he won. He has even trained with him. He can give me some tricks, tell me how he is.”

According to reports it was GSP’s coach, Firas Zahabi who approached Story with defecting to the try-star gym and helping GSP prepare.

“I wasn’t convinced at first.” Story said. “But I told myself it would be good for my career to work with a such a reputable camp. I am certain Johny [Hendricks] will understand my decision to come here. I have to do everything to succeed and he’ll understand that.”

Will this new pairing help the champ retain his crown?