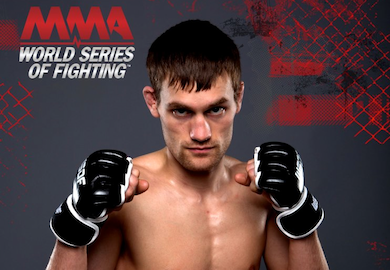 Tickets for World Series of Fighting 7, which start at just $29, are available at TicketLeader.ca

“Anyone who’s seen Rick Glenn and Georgi Karakhanyan fight knows what kind of exciting, dynamic athletes they are in the cage,” World Series of Fighting President Ray Sefo said. “These two have proven themselves as the top two fighters in our 145-pound division, and I can’t wait to see them meet for our first-ever featherweight belt.”

Glenn is a 24-year-old member of Wisconsin’s famed Roufusport team. An Iowa native, Glenn has been competing professionally since 2006 and is unbeaten in his past 12 contests. He’s fought twice under the World Series of Fighting banner, earning a knockout over Alexandre Pimentel in March and returning in September to score an impressive decision win over a previously unbeaten Artur Rofi.

Meanwhile, Karakhanyan brings an eight-fight win streak to the matchup. The 28-year-old Millennia MMA fighter, who was born in Russia but now makes his home in Southern California, also turned pro in 2006 and has since racked up 22 wins, including 12 submission victories and another four by knockout. He debuted for World Series of Fighting in September, scoring an impressive first-round submission win over Waylon Lowe, who had won his previous four fights by knockout.

The winner of the Glenn vs. Karakhanyan will join recently crowned welterweight champion Steve Carl as the first two title holders on the World Series of Fighting roster.

With the addition to the World Series of Fighting 7 lineup, the night’s main card now includes: