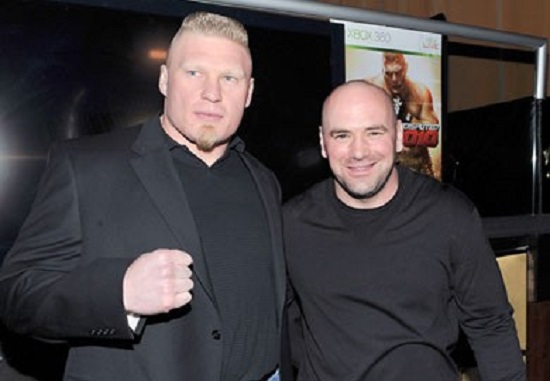 Former UFC heavyweight champion Brock Lesnar is reportedly on the verge of a UFC comeback.

The massive pay-per-view star has not seen the inside of the cage since a TKO loss at UFC 141 in 2011.

Dave Meltzer of F4Wonline has the scoop:

Speaking of Lesnar, even though he is no longer being advertised as one of the stars on the 1/19 Raw show in Dallas, he is still booked on the card. It’s a 180 from building the Raws that he was on around him as the top star to not even listing him as a top star. The Lesnar people always keep things quiet, but within the company, the belief is that he’s going back to UFC, and his showing up lighter to TV last week confirmed that to people who thought it. If it wasn’t for Punk, this would be a big deal, but with Punk, it’s a much bigger deal because the last thing WWE wants is this perception that UFC has just grabbed two of the company’s biggest stars. Lesnar is back on the 12/29 Raw in Washington, DC.