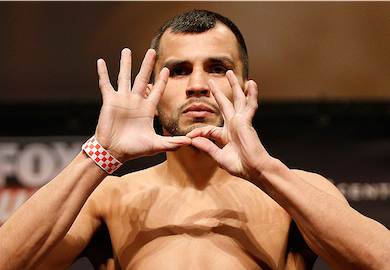 Four more fighters appear to have been released by UFC.

Disclaimer: This information is all based on updates to the UFC.com lists of active fighters. Profiles will very likely still exist for each fighter as the UFC retains a database of all former competitors, but these fighters no longer appear on the UFC roster lists themselves. It often takes a day or so for roster changes to become apparent, so some fighters may still remain listed for the short term. All information in this post is gained through UFCFIGHTERSiNFO, a twitter account that uses a ruby script to check the UFC’s website for changes.

According to the information gathered by UFCFIGHTERSiNFO, the UFC has made some room in the promotions 135-pound division by letting go three of it’s bantamweight fighters including Edwin Figueroa, Junior Hernandez and Shunichi Shimizu.

Shimizu only had a one-fight contract with the UFC, and after losing his debut to Kyung Ho Kang in disappointing fashion he has been let go.

Figueroa went 2-4 while fighting in the UFC, but after going on a recent skid of 0-3, he will now likely receive his walking papers.

Hernandez went 0-2 while fighting under the Zuffa banner, suffering a submission defeat to Lucas Martins and a decision loss to Hugo Viana respectively.

Meanwhile, the apparent fourth fighter to have been let go is middleweight Brian Houston. Houston had joined the UFC after competing in just 4 professional fights, but after suffering losses to Derek Brunson and Trevor Smith, it looks like it’s back to the regional circuit for Brian.

Props to BloodyElbow for the find.