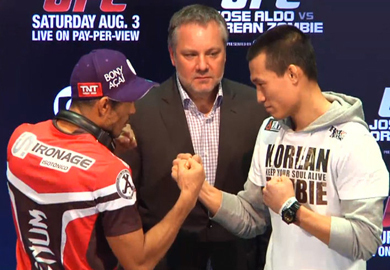 With that being said, here is what he said via MMAFighting.com about UFC 161 and UFC 163:

On Aug. 3, UFC 163 from Rio de Janeiro, Brazil, headlined by Jose Aldo’s win over Chan Sung Jung, the Korean Zombie, is currently estimated at doing 170,000 to 190,000 buys based on several estimates from the cable and MMA industry. It looks to have beaten UFC 161, headlined by Rashad Evans vs. Dan Henderson, two significantly bigger names, but with no championship belt at stake, by about 35,000 buys.

It says that the featherweight title is worth something, and also gives an ominous message as to the current drawing power of Evans, who headlined a few of the biggest events in company history.

But fans are more and more willing to skip buying every show, especially when the pay-per-view doesn’t have a can’t-miss match. UFC 163 came a week after a major television show, and two weeks before another. The debut of UFC on Fox Sports 1 showed that the UFC fan base for the most part is not a casual viewer. Even though most would agree Saturday’s debut on FS 1 was a stronger lineup than the July 27th show on FOX, the idea that a show on FOX would do a 1.5 rating and a show on an unfamiliar station that didn’t even exist the day before would do a 1.4 is nothing short of staggering.