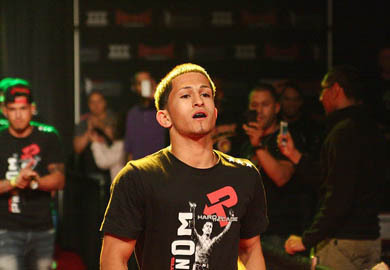 Sergio Pettis (9-0 MMA), the younger brother of newly-crowned UFC lightweight champion Anthony Pettis, has reportedly signed a multi-fight contract with the UFC and will likely make his promotional debut in around seven weeks time.

“Yes he just signed with the UFC. Signed on Monday and now will fight Nov. 16 – said the coach, who also revealed that Sergio will fight in the same category as the Brazilian Renan Barao.”

“He will fight in the division to 61.2 kg, which is the weight-cock. Still do not know who will be the opponent, but they are required to confirm soon. The UFC wanted Sergio before, but the Duke (Roufus) was waiting for him to gain a little more experience to be able to fight at the level of the UFC guys. After you enter has no easy fight, but finally got the chance of Sergio.”

Following his most recent win against James Porter at NAFC: Battle At The Ballroom, Pettis dropped to his knees and asked for his chance to fight in the UFC. Now, the RFA flyweight champion will finally get his shot on the sport’s biggest stage.

Sergio Pettis’ octagon debut will reportedly be in the bantamweight division at UFC 167, however, the UFC has yet to confirm the news or whom he will be fighting.