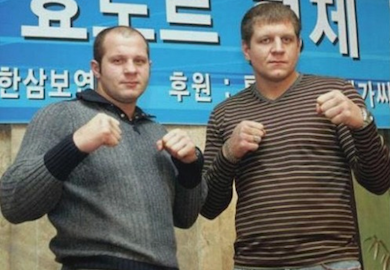 According to a report coming out of LifeNews.ru, one of MMA’s most beloved sons recently found himself in a heap of trouble surrounding some very gross and disgusting allegations of rape and physical abuse.

Few details have emerged about the situation, but according to the Russian report, Aleksander Emelianenko (pictured right), was recently accused of sexually assaulting and beating his 26-year-old housekeeper.

After being admitted into the hospital to record her evidence of physical and sexual abuse, the victim later retracted her testimony and asked authorities to halt further investigation into the matter.

The original report, in Russian, has been translated for your review:

While Emelianenko was unable to say whether it was done with the consent of the girl or forced. The suspect agreed to take the polygraph test .

– In search of the apartment were found Emelianenko evidence mentioned by the aggrieved Polina Stepanova – bottles of olive oil. In addition, the blood of the girl found traces of drugs, according to her, made her a fighter take illegal drugs – said a source in law enforcement. – Unit admitted that was in a state of extreme intoxication .

In the coming days Aleksander Emelianenko will take a lie detector test , from which previously refused. Within a week, investigators should determine the criminal case .

Recall , 26 -year-old Pauline S. – nearby store saleswoman , who moonlights as a housekeeper Emelianenko – Alexander accused of raping and beating .

March 5 , it became known that the fact that sexual violence and beatings doctors confirmed the trauma center where the victim turned on the next day of the incident .

– Pauline S. came to the emergency room on 2 March and recorded traces of beatings and sexual abuse. Doctors sent a telephone message to the police, but the aggrieved statement addressed to the Investigation Committee in just two days – said a source in law enforcement.

Later she renounced its claims to the soldier . In communicating with investigators , she said that she wanted to stop all proceedings and has no claim to it. Take her statement , however, failed: paper is heavy , and in case of failure of reading Woman can attract liability for defamation .