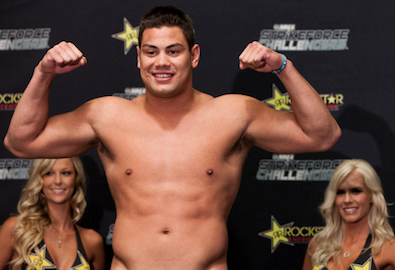 Last week it looked like all hope was lost in regards to UFC heavyweight Shane Del Rosario.

The Heavyweight prospect and former world champion kickboxer has been hospitalized since last Tuesday and multiple reports that his passing was eminent were all around the web.

Today we have a new hope.

In a report coming out of Yahoo.com it looks like the miracle MMA fans have been praying for may actually be underway.

While his prognosis is still grim, signs of hope are all we can ask for during this difficult time.

Hospitalized UFC heavyweight Shane del Rosario showed signs of brain activity and was taken off life support this weekend, according to the fighter’s teammate and friend Erik Apple.

Del Rosario is now able to breathe independently and he squeezed his mother’s hand, Apple added. MMAWeekly.com confirmed the information after an initial report from Sherdog.com.

“He needs to keep fighting,” Apple said in a text message. “None of these are definitive. However, they give us some hope.”

Apple added that del Rosario has been placed on a respirator, a mask-like device used to prevent the inhalation of noxious substances. The fighter had been on a ventilator, which was used to assist with breathing.