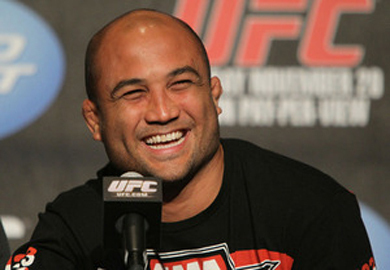 B.J. Penn will go down in history as one of the best and most decorated fighters in history.

He cemented this accolade by dominating the world’s lightweight division in Mixed Martial Arts for the better part of a decade.

With retirement talks running wild and a failed bid at welterweight, “The Prodigy”, is apparently considering a return to the division that made him a household name, 155 pounds.

“The door is still open for BJ Penn to return to MMA in the future,” Ariel Helwani reported on the most recent edition of “UFC Tonight” on FUEL TV. “He’s actually training right now and has to check in with his body and mind in the next few months.

As a lightweight BJ rose to championship status inside the UFC and his lone losses in the division came at the hands of champions Jens Pulver and Frankie Edgar by decision.