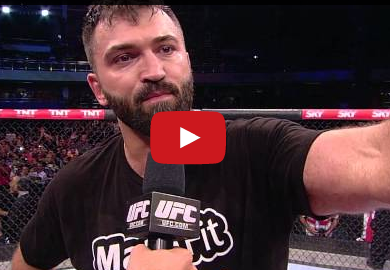 Last night at UFC Fight Night 51 in Brazil, Andrei Arlovski finally got his revenge on Bigfoot Silva in the form of a first round KO.

For those unfamiliar with the situation, back in 2010 under the now defunct Strikeforce banner, Andrei Arlovski met Antonio ‘Bigfoot’ Silva in the cage for a three round war that saw Bigfoot pick up the unanimous decision.

Last night Arlovski extended his UFC win-streak to two by KOing Bigfoot Silva in the first round of their 5-round main event bout.

After the bout he spoke to Jon Anik in the ring to talk about what the win meant to him.

Note: the fight highlights run during Arlovski’s interview with Anik.