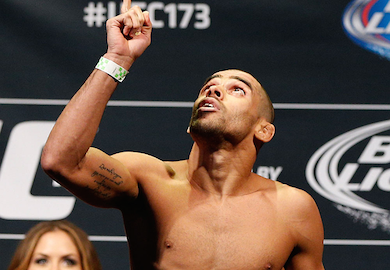 Renan Barao will return to the octagon for the first time since losing his strap to T.J. Dillashaw at May’s UFC 173 event in Las Vegas. That loss snapped a 33-fight win streak for Barao, which included a perfect 7-0 run in the UFC.

Barao had been slated to rematch T.J. Dillashaw at UFC 177, but unfortunately the former champion fell ill while cutting weight and was unable to perform.

Meanwhile, Mitch Gagnon will be looking to extend his current win streak to five when he takes on Barao this winter. The Canadian bantamweight was most recently seen in action earlier this month at “UFC Fight Night 54”, where he scored a submission win over Roman Salazar. Prior to that, Gagnon earned a decision win over Tim Gorman in April.

Will Mitch Gagnon be able to pull of the upset or will Barao return to form in front of his home country? Sound off Penn Nation!