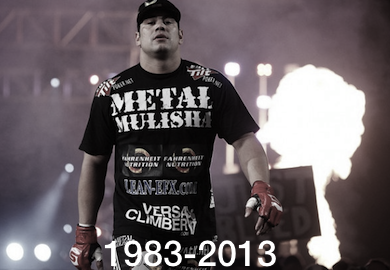 It’s a strange thing, finding out that someone who you don’t know personally, but know from the media has passed away. It’s almost like you’re not sure if you should grieve and be upset. You weren’t family, you weren’t friends; but still you feel that sense of sadness and pain. What should we do? There really isn’t an answer to that question. We all go through emotions in different ways. You might read an article about a famous actor or in this case a UFC fighter, who has passed, and feel that urge to cry or you could read the same thing and become angry, mad that someone with so much talent and potential was taken away too soon. We are human beings. We admire people and look up to those that we strive to be more like. So go ahead and be human. It’s ok to be upset. The one thing, no matter how close we were to the person, is that we do our best to remember them. That’s how the memory of their lives will never disappear. This article is a small way for us to remember the life and career of Shane Del Rosario.

Shane Del Rosario was born September 23, 1983 in Orange County, California. He began to train as a fighter at the age of 17,  at first, only as a hobby. Del Rosario attended college at UC Irvine. He graduated with a degree in Psychology.

Before his MMA career, Del Rosario competed as a Muay Thai fighter. He eventually won the WBC Muay Thai World Heavyweight title when he defeated Ricardo van den Bos via knockout at the very end of round one. This earned Del Rosario the distinction of being the very first American to hold the title.

In 2008, Del Rosario won the title again when he defeated Ricardo Romero.

He fought for several promotions including King of the Cage, EliteXC, M1-Global and Strikeforce before signing with the Ultimate Fighting Championship.

Entering the UFC he had an undefeated record of 11-0, with all of the wins coming by way of TKO or submission in the first or second round.

Barry would be the last fight inside the cage for Del Rosario. On November 26, 2013 he was hospitalized after suffering full cardiac arrest following two heart attacks. Del Rosario had no previous heart issues but doctors now believe he may have had a rare condition called Long QT syndrome.

Del Rosario’s family released a statement to The Associated Press,

“As always, Shane fought hard, but it was his time to go in peace. We will miss his huge smile, his huge bear hugs, his gift of giving to others, and his Aloha spirit. He was larger than life.”

Del Rosario’s family plans on going forward with Shane’s wish to be an organ donor.

“He was passionate about helping others and was always there to offer a helping hand, a smile, and encouragement to anyone, not only family and friends, but also to strangers,” the family said in their statement.

Let’s remember Del Rosario not only as the great fighter, but more importantly the great man he was.

RIP Shane Del Rosario, you will be missed and remembered.