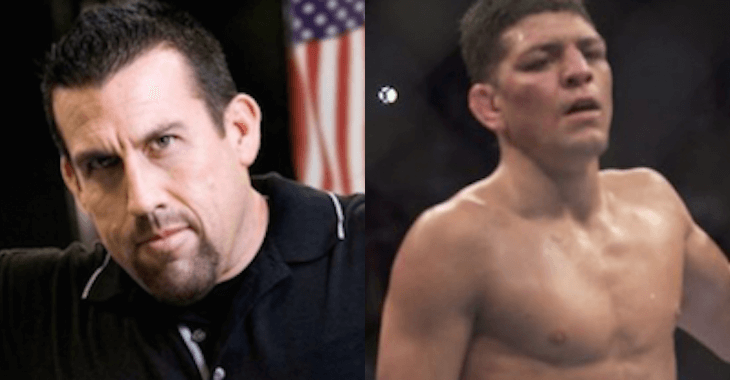 There’s no denying that the majority of reactions to Nick Diaz’s five years suspension have been in support of the fighter. For crying out loud there’s a White House petition out there that has already received 47K signatures and it hasn’t even been a week. Sign HERE.

But there have been those few who have given their opinion on the matter and haven’t exactly been team #FreeNickDiaz.

On a recent episode of his podcast, ‘Let’s Get It On!’, MMA referee ‘Big’ John McCarthy talked about the suspension and said that flat out, Diaz is just wrong and that he’s breaking a rule.

“Nick Diaz is wrong, OK? Let’s just flat out say it. He’s breaking a rule. Now he’s trying to cover himself in breaking the rule because he knows he’s going to break the rule. Nick uses marijuana. He has always used marijuana. He is a guy who is, you know — I honestly believe that he knows he’s a better person when he’s on marijuana than if he doesn’t take it and he’s going to be an angrier person. I think he believes that it helps him emotionally, it calms him down, it keeps him in a mood that he’s comfortable with. And so he’s got a medical marijuana card from California. He uses it, he uses it to keep himself in check. And he’s going to continue to use marijuana. The problem is this: When Nick goes and applies for a license with a state athletic commission — we’ll say the Nevada State Athletic Commission — they’ve already spanked him twice. He’s been caught twice previously by the Nevada State Athletic Commission and when a fighter goes and applies for that license there are forms that he has to fill out. No different than when I have to fill out the forms when I get a license. And those forms are going to ask questions and those questions — you know when you sign your name at the bottom you’re saying that this is truthful. You’re being honest, you’re being truthful with this. And Nick is not being honest and truthful. He’s giving bad information because all he needs to do is be honest and truthful and tell them, ‘yes, I take marijuana.'”

Do you guys agree with any of McCarthy’s points or do you still think the NSAC was way off base?