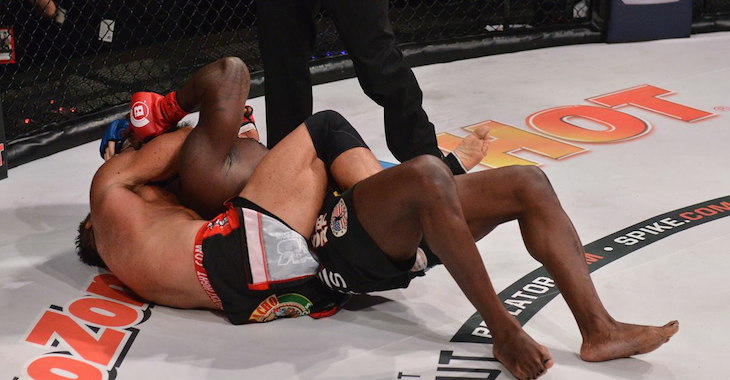 Kimbo Slice and Ken Shamrock concluded Friday’s “Bellator 138” broadcast with a bit of controversy in their main-event bout. Slice was taken down immediately in the opening round and it seemed like Shamrock had locked in an inescapable rear naked choke.

Shamrock cranked on the hold and it looked like Slice had submitted by tapping out, but referee Big John let the fight continue. It wasn’t long before Slice had made his way back to his feet and blasted Shamrock with unprotected punches, causing a knockout victory.

“So, I went over what would make me stop the fight,” McCarthy told MMA Fighting. “His hands came out during the choke, but he would have had to have made more of a continuous motion for me to say he was tapping,” McCarthy said. “In my opinion, that was a fighter contemplating tapping and then working through it.”

Slice claimed to have ‘evolved’ after his bout by showing submission defense. Do you think he evolved, or did Shamrock simply let a golden opportunity slip? Share your thoughts in the comment section below!