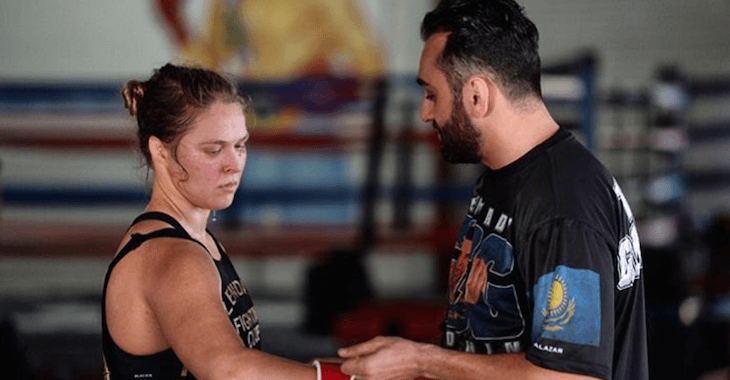 My goodness, Ronda Rousey’s mom really isn’t a big fan of her coach, Edmond Tarverdyan, is she?

In a very short clip from a recent interview, Dr. Ann Maria De Mars explained that she doesn’t like Tarverdyan and that he’s a ‘bad person and terrible coach’.

Well, she took things even further, in a different clip released from the interview. We’d show it to you, but shortly after it was put up, it was then made private.

But, we do have the quotes, showing just how far the hate for Tarverdyan seems to go, and it’s pretty far.

“Yes, (we’re talking about her current coach). I hate him. I would run him over with my car if there wasn’t a law against it.”

“Yes, you can say his name! Who the f*ck is he?! He’s not like the f*cking nameless one from Harry Potter! I hate that guy! He’s like the most worthless human being God ever put on this earth.”

Ronda is making headlines for all the wrong reasons as of late. The UFC champion made her relationship with Travis Browne public this week, and now her mom continues her campaign against her coach.

With all these non-fight related headlines will Ronda’s head be right for her pending title fight against Holly Holm?

The duo face off in the main event of UFC 193, set to go down in Australia in the first part of November.