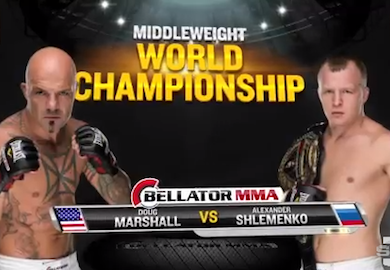 Bellator wrapped up it’s ninth season last weekend in Bethlehem, Pennsylvania, with ‘Bellator 109’ which was headlined by a middleweight title fight that saw Andrew Shlemenko stop Doug “Rhino” Marshall in the first-round to reclaim the middleweight strap.

According to a report from MMAFighting’s Dave Meltzer, the event did the third-best numbers of the season for the promotion, hitting an average of 691,000 viewers.

The evenings main event, a middleweight title fight between Shlemenko and Marshall, peaked viewership at 1,009,000. It was the third main event to hit the seven figure mark this season for Bellator, following in the footsteps of Eddie Alvarez vs. Michael Chandler 2 and Rampage Jackson vs. Joey Beltran.

No announcements have been made regarding Bellator’s 2014 schedule, and whether it will remain on Friday nights or switch back to Thursday nights, which earned the promotion best overall numbers.

Stay tuned to bjpenn.com for further updates as they become available.