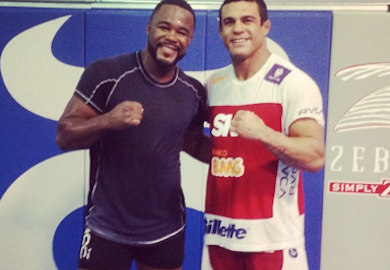 “I don’t know, hopefully he gets the title shot. The thing with [Vitor] having to pull out — or the fact that he had to be pulled out — was that he wouldn’t have been able to pass the inspection with the new rules. Because it takes at least 12 weeks for [TRT] to be out of your system. He didn’t have that. So he wouldn’t have been able to within the rules and regulations of it. I don’t think he needs to compete with TRT. [Vitor]’s a great fighter, great athlete, he doesn’t need any. I see so many people, they say such negative and nasty things about him and there’s been people that can make him the face of TRT, like there wasn’t so many other fighters who’ve done it, and [who still do] it.”

During a recent interview with Ariel Helwani, former UFC light-heavyweight champion, ‘Suga’ Rashad Evans touched on his teammates recent struggles both professionally and with the media.

Vitor Belfort has no doubt become the poster boy of TRT. But those days are gone and Evans wants the world to move on.