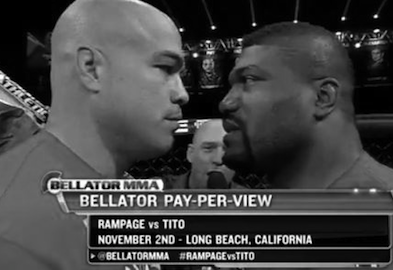 The ‘People’s Champion’ and ‘Rampage’ characters may have to wait a bit longer to make their next public appearances as Tito Ortiz and Quinton Jackson prepare for a different kind of fight than they are used to: Legal Battle.

The two former UFC fighters are being sued by ex-trainer Juanito Ibarra because he felt like they made quotes that were damaging to his reputation. Both fighters have stated in numerous interviews that Ibarra is a ‘thief’ and a ‘liar’. Jackson has gone as far to say that Ibarra caused $30,000 that was meant for his camp to disappear.

Juanito Ibarra is unhappy with these accusations and is currently trying to sue both men in multiple cases. One case will be against Ortiz and Jackson, while the second is singularly against Jackson.

The case solely against ‘Rampage” stems from an interview in October 2012 when Jackson called his former trainer a ‘crook’ that stole money from his trainees. Jackson has fired back, claiming Ibarra broke a promise they made at the time of the split that they were not to sue each other. Tito Ortiz, on the other hand, has claimed that his comments on Juanito Ibarra were examples of casual trash-talk that is thrown around in the mixed martial arts community.

The date was set for July 14th for the first case.