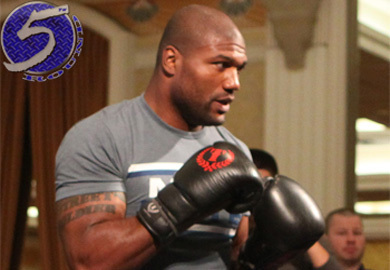 Next week, former UFC Light-heavyweight champion, Rampage Jackson takes on Glover Teixeria on the UFC on FOX 6 main card in what will be his last contracted UFC fight.

Jackson has earned the right to be considered one of the sports best and brightest stars and he has done so both inside and outside the cage.

Now the former champion hopes to take on new roles as an athlete and as he tells ESPN, he may want to try his hands in the great sport of the sweet science.

“I’ve given [UFC] time to keep me happy,” said Jackson. “Honestly, I think the UFC is happy with me leaving. It’s a mutual thing.”

“I’ve put my time in. I did my thing,” Jackson said. “I just want to entertain people. I want to be very exciting. Maybe I want to try some boxing or do some kickboxing. I’ve done jiu-jitsu tournaments, wrestling tournaments, kickboxing fights — but never boxing. I think that would be my biggest challenge — to see if I can be a pro boxer.”