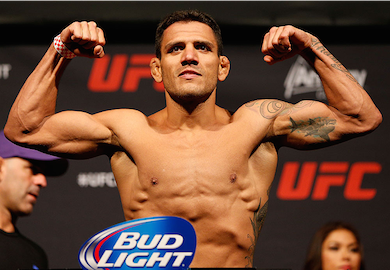 It may be easy, for fight fans, to count the Brazilian fighter out, he tells FOX Sports that Benson has holes in his game.

“He’s a tough guy, a former champion, and I think this will be a really big step towards the belt. The belt will come, but I don’t want to think too much about it. I really want my title shot, but I’m not stuck in this thinking. I just want to fight and be exciting and that will come naturally.”

“A big win over Benson Henderson Saturday night and I will fight for the title I’m sure.”

“I think I’m stronger than him. I’ve been in the Brazilian Jiu-Jitsu world a long time, I’ve been training since I was nine years old and I earned my black belt when I was 20 years old so I’ve had nine years as a black belt. I see a lot of holes in his game and I’m going to take advantage of that.”