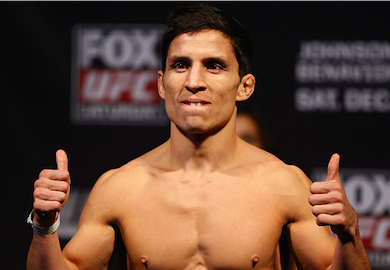 UFC on FOX 9 took place this past Saturday from Sacrament’s Sleep Train Arena.

The decision heavy card was capped off with two amazing finishes in the main and co-main events. Urijah Faber was able to submit Michael McDonald in the second round and Demetrious Johnson knocked out Joseph Benavidez in the first.

Check out some of the reaction from the UFC on FOX 9 fighters below:

Thx for the war @niklentz ur a tough sob!

Thank you everybody for the support! Thank you my coaches and partners! I'm blessed to have great people surrounding me! God bless everyone

I'd like to thank everyone for their support. Its almost impossible to respond everyone back so I apologize if I didn't get back to u

Feel like I woke up in a bad dream but nope it's just real life wanting to see what your made of. #Obstacles

Just wanted to put on a good fight.

And who the hell says Flyweights don't hit hard…

@JoeJitsu thank you joe b for the great fight. I hope you are okay. You will be back stronger it's in your character..remember milkshake 🙂

Leaving Sacramento, thank u to all the fans out here. i apologize for my performance last night. Hats off to my opponent

It was an excellent display of martial arts and warrior spirit on both sides. I love this sport. I'm proud of Mac, he fought hard and…

…gave it everything. As a friend and corner man. I couldn't ask for any more. Keep supporting those fighters. They all deserve your love.