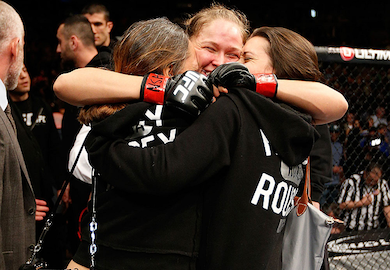 It’s not uncommon for the MMA world to take to twitter following any major fighting event on the planet.

Such is the case with last weekend’s UFC 170 event.

Would Dana and Ronda be saying good stoppage if roles were reversed? I highly doubt it.

Seemed a bit like a fast stoppage to me. Is this Herb compensating for almost letting the other match go to long.

Maybe stopped a little bit early would have like to see it go a bit longer! #UFC170

After a shot to the liver your brain, heart and liver: Heart: Get up already, damn it! Brain: shut up heart! Liver: I'm out, screw u both!

Come on it might have been over but this is a title fight give them a chance at least! Too many early title stoppages! #UFC170

Come on it might have been over but this is a title fight give them a chance at least! Too many early title stoppages! #UFC170

Great fights on #UFC170 ladies!!! @RondaRousey and @Sara_McMann I was excited to see the stand up battle, but those body shots are no joke

Honestly wtf was that @HerbDeanMMA?

Congratulations to the champ! @RondaRousey #WorkhardWinEasy

Sara was on her way back up… Let them fight…

That last replay was a better vantage point to see what Herb saw, I can see why he stopped it as Sara was holding her body in pain

A little premature but a wins a win… Wrestling is still a lot cooler then judo ; )

Herb normally does a great job, but that stoppage was really bad. McMann was coming back up.