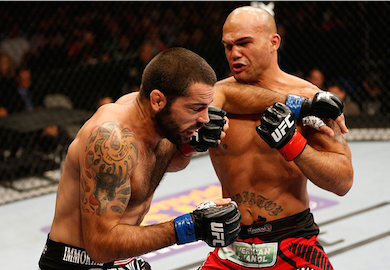 As usual, the MMA world took to twitter with their reactions.

Robbie is a great counter striker & is dangerous when he throws hooks. @UFCONFOX

There comes a point n every great battle where both sides are defeated, the side that keeps fighting is victorious- Napolean @ufc #warriors

Punch him in the belly man baby

Matt Brown is a #dog I swear lol @ufc

Great fight! @IamTheImmortal is tough as they come and represented well for the WW! Welcome to The @DudeWipes @dudeproducts Family brother!

Great fight! I got Lawler winning. Looks like a rematch between the champ J.H. and R.L. Will happen.

Unbelievably impressed with Matt Browns aggressive attacks in the 5th. U can't fake that kind of toughness! @ufc

I'm taking off my dress shoes and putting on my Adidas and getting ready to walk back to Vegas! I didn't see that coming!!!

Lawler should have this fight in the bag. Brown is one tough bastard.

This fucking guy makes it look like, to him, it's no big deal. @Ruthless_RL #UFConFOX12 @AmericanTopTeam

Damn what a fight congrats @Ruthless_RL