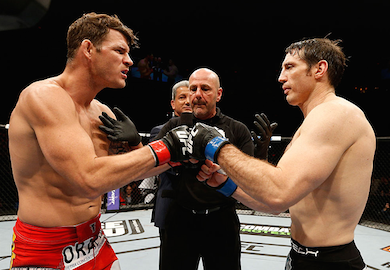 Last Night on FOX Sports 1, two TUF champions were crowned, Patrick Cote lead The TUF Nation’s Team Canada to a clean sweep, and Tim Kennedy backed up all the pre-fight trash-talk with a dominant decision win over Michael Bisping.

Some of our favorite fighters took to twitter with their reaction.

what's up with the lay and pray … fight like a man

@TimKennedyMMA can keep this up for 5 rounds can Bisping. Thought this might happen. #ufctufffinal

Who in the hell is Booing this fight? They should be banned from life.

What a monster on the mat @TimKennedyMMA nice display of control!!

Tim is keeping Mike from getting to the cage, Mike meeds butterfly guard to make space but Tim's hips are very flexible & he is a hobbit

Congrats @TimKennedyMMA always happy to see you get a W!

Kennedy looked good. Solid wrestling and power punches. Love the show of respect after the fight from both guys.

Not a lot of exciting ways to beat Bisping, even Vitor was struggling with his pace & striking before huge kicks, very very sound fighter

Notch a win for the good guys @TimKennedyMMA

When Kennedy beat me you said he hasn't beaten anybody. You got your ass spanked for 5 rds what are u going to yap now @bisping big mouth

If you missed the fight card last night HERE are the replays.