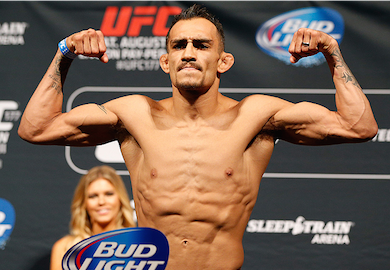 Last night at UFC 177, in the co-main event fans saw TUF winner Tony Ferguson capture a razor thin split-decision win over Danny Castillo, who won the fight in the eyes of many.

Below we have compiled Tweets from UFC fighters who gave their take on the fight via Twitter.

Tony did all the work on the ground and Danny tried to just hold him down.

I have to say I agree with judges decision, and I was rooting for Castillo

@lastcall155 you owe no apologies! You put on a hell of a fight and left it all in the cage!!

Keep your head high @lastcall155 . I thought you won that. Proud of you brotha. #UFC177

Watching the #UFC177 I think Tony out worked and should win ! You can't win by stalling and running ….

Tony was the better fighter either way IMO. But he gonna have to sneak out the back of that mfer