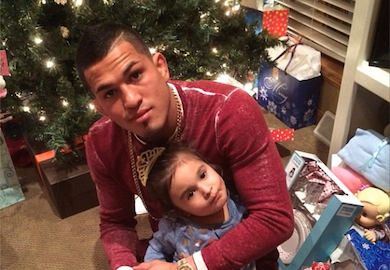 Yesterday we celebrated the year-end holiday of Christmas.

Even I got into the spirit this year and enjoyed an exchange of gifts with family and friends.

Much like everyone, the MMA world’s most popular faces got in on the action yesterday and sent out their photo’s and best wishes through twitter.

Merry Christmas everyone. Have a great day!!!

Present from my brother to my nephews, what do you think @ufc ? pic.twitter.com/V1UA5faCKM

This is my daughter, Gia pic.twitter.com/HXeHcjr6B4

Happy Holidays & Big Cheers to all plus your families and loved ones… Have fun!!! pic.twitter.com/etNwGeX3G8

Merry Christmas to all, and to all a good night. Much love from my family to yours! http://t.co/wvFVAXVMCt

My brothers and I. I love #ChristmasEve pic.twitter.com/RLMbIy6lCe

Wishing you all a Merry X mas! pic.twitter.com/roLCeOxoNu

Happy holidays everyone!! #alliwantforchristmas is to get my next @ufc fight booked @seanshelby @danawhite 😀

Merry Christmas KOCHEADS! Have a safe and wonderful holiday! Lots to look forward to in 2014

Merry Christmas 😉 to everyone… Love you all pic.twitter.com/Em9BcalSIA

Thanks for the GIANT Snickers bar @shynel_k! Love ya!!! pic.twitter.com/f5NpNzrlIP