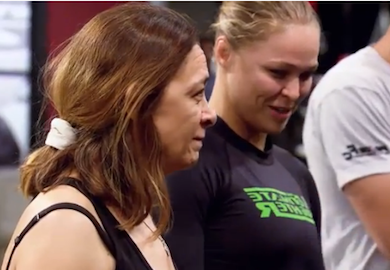 Yesterday we featured a clip of Ronda where she once again flashed her favorite finger (the middle one) towards Miesha Tate while proceeding to cuss her out during their TUF 18 coaches challenge.

MMA fans continue to resent the UFC’s first female champion for her offensive behavior and the Rousey women have had enough.

People who want to see fighters beaten to the point of concussion, dislocations but think flipping someone off is bad sport – hypocrisy