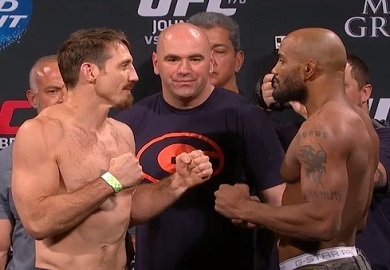 Yesterday on the main card of UFC 178, after nearly being KO’d at the end of round 2, Yoel Romero’s corner bought him nearly 30 extra seconds on the stool between rounds. When the 3rd round started Romero went out and TKO’d Tim Kennedy.

Below is a compilation of some of the best reactions from UFC fighters on Twitter regarding the situation, which is being called ‘Stoolgate’.

Romero is the biggest 185lbs that I ever see

Kennedy is an excellent athlete but Romero is another level of freak. #UFC178

Wow! Crazy end to that fight! Congrats to @YoelRomeroMMA @AmericanTopTeam

Ok that was a great fight….but it has to be one of the best after fight speeches of all time. @YoelRomeroMMA @joerogan

@TimKennedyMMA got screwed. Fight should have been over after the 2nd.

@YoelRomeroMMA is a bad bad boy! What a fight @TimKennedyMMA rematch, u gotta answer the bell

Didn't answer bell. That should have been the fight. Big John made a mistake.

Wow @timkennedymma should have had extra time to recover like @yoelromero but want to watch a rematch http://t.co/nNgVTwUBeU

You should be ashamed of yourself Yoel #UFC178

This is absolute bullshit!!!! Big John fucked up. @TimKennedyMMA got robbed!!!!'

The stool delay tactic > the spilled bag of ice.

That's why @TimKennedyMMA protects our freedoms. Wow this fight is crazy!!!

As much as I hate to say it tom Kennedy should get a rematch. Guy was out on his feet and delayed the start of the third round.

@YoelRomeroMMA next 185 lb champ, and every one in Dagestan love you @ufc

NAC 467.728 If a combatant fails or refuses to resume competing when the bell sounds…the referee shall award a decision of TKO