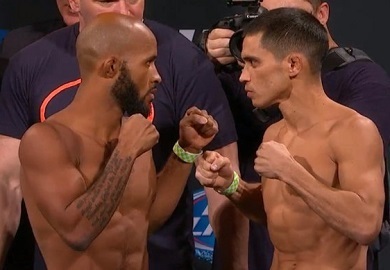 Last night in the main event of UFC 178, Demetrious Johnson retained his flyweight strap in dominant fashion after submitting Chris Cariaso in the 2nd round of their title fight.

Below are some of the best Tweets from UFC fighters regarding the main event.

Its Mian event time and one of the top pound for pound fighters is up Johnson! And iv got him winning this fight! #UFC178

Matt Hume is more technical than the most advanced MMA fighters of today. Amazing coach

I saw him fall. We all know I woulda landed that flip lol #UFC178

Cariaso wasn't ready for that fight. Not trying to take away from DJ cause he's a beast.

Great finish there by DJ with my favourite submission The Kimura! Cant see anyone beating him anytime soon at 125! #UFC178

@MightyMouseUFC way to do work! Nobody rooted against you cause they knew better! Congrats to the Johnson Family pic.twitter.com/C5Jrchzlte