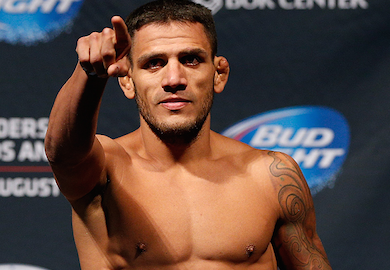 Last night fans saw Rafael Dos Anjos knock out former lightweight champion Benson Henderson, below we can see Tweets from some of the UFC’s stars reacting to the brutal KO.

WHAT!!!!! Caught him slipping! He was hurt before the knee

Khabib Nurmagomedov defeated Rafael Dos Anjos back in April, which likely was the reason for this Tweet.

and now you understand who is who @ufc

I'd say a pretty fast stoppage but dos Anjos looked great and earned the Tko stoppage in rd 1! #UFCFightNight

Big john…you sir fucked up. That being said, Henderson wasn't gonna win tonight. RDJ is starting to rise above and shine.

Did I just call that $%#T or what!?!? #UFCfightnight Nice. Kinda short stoppage, but glad to see both fighters OK @UFC #Finish

RDA was impressive tonight. Khabib is going to be the next champ though IMO. No one can wrestle with that guy.

How u gonna stop a fight after one punch if he's not out cold????

If he was out why was he gettin up??? RT @ASUTRUE: @chicanojohn he was out john

The refs job is to keep us as safe as possible. If you want to be all punch drunk and damaged goods once your career is over go box

People, this is MMA, anything can happen.