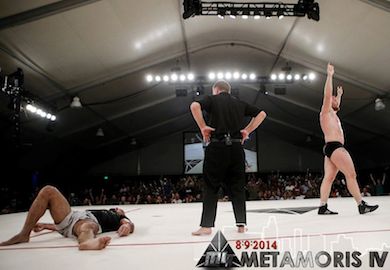 As with most things, Pros took to twitter with their reaction:

I have a feeling someone's getting tapped in this one @MetamorisPro

Kind of feels like I am watching Royce vs Dan Severn. @MetamorisPro

Records are set to be broken. War Master with the FINISH #metamoris #csw

1st time Dean has been submitted in 16yrs! #AllHailTheWarmaster #CatchAsCatchCan

Didn't expect that one. Josh Barnett dominated Dean lister from start to finish and got the sub @MMAKanvas @UFC_Australia #Metamoris4