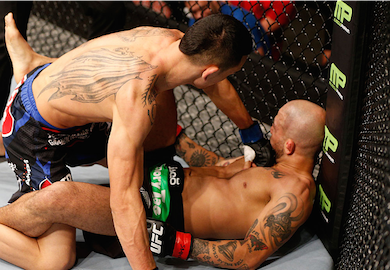 Across the pond in Canada, the UFC returned to action with UFC Fight Night Halifax. In the evening’s main event, Rory MacDonald made his case for UFC gold in shutting down Tarec Saffiedine.

Here’s the immediate reactions from the weekend’s defeated fighters.

Magnus Cedenblad's gum shield after I kicked him in the face!! Credit to him for getting back into the… http://t.co/DbpV6afSur

Honor to fight alongside one of the toughest guys in the @UFC @Rick_Story way to battle for the win #UFCSweden #USA pic.twitter.com/14A0PgyG9n

@TpostMag Thanks bud. Great to have u here!

I have no excuses , I was the most prepared as I could … At the department , and so much … Thanks for the support I promise a better return

Thanks everyone for the support. Just a minor setback. I ll be back!!! Merci à tous pour votre soutien! Je reviendrai meilleur!!

Just want to apologize to you guy for my performance tonight. My head wasn't in the game and it cost me the fight. Sorry you guys.

Thanks to all my friends for coming out. I didn't get the W but I'll come back stronger. #ufchalifax… http://t.co/df0XfnWiGD