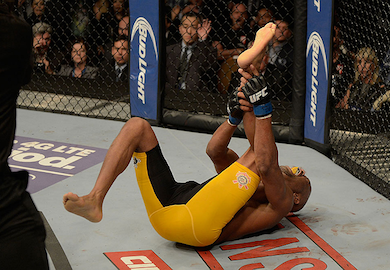 On Saturday night we witnessed one of the most gruesome injuries in MMA history.

And it happened to a legend.

In his bid to regain his UFC middleweight title, Anderson Silva, fell in the second round when he broke his leg during a checked leg kick.

The man considered to be the greatest fighter of all time was rushed to the hospital after the fight for emergency surgery and now the world waits to see if Silva will attempt to return to MMA.

Shocked, the MMA world took to twitter with their reaction.

Fighting? yes. Career wise? skies the limit“@Jamesrkobird: @JonnyBones jon do you think it the end for silva?”

Have some big shoes to fill but ima take this sport to new heights!!! Forever will be fans of #GSP @SpiderAnderson

@SpiderAnderson will never be the same.

My support goes out to Anderson, u wouldn't wish that to your worst enemy.

Very upset that the fight ended that way. #sad

@SpiderAnderson was a great champion&history will reflect that. I hope he heals 100% I don't wish that on NE1, but it @ChrisWeidmanUFC time.