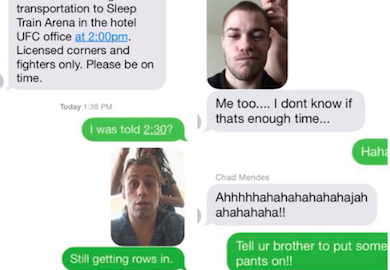 Prior to last Saturday’s UFC on FOX 9 co-main event between Urijah Faber and Michael McDonald the two fighters shared a friendship.

While their time together, prior to their bout, may have been limited, it still didn’t stop the friendly exchanges come fight night.

Urijah was able to continue his win streak with a second round submission over the young prospect in McDonald, but before their fight this happened: