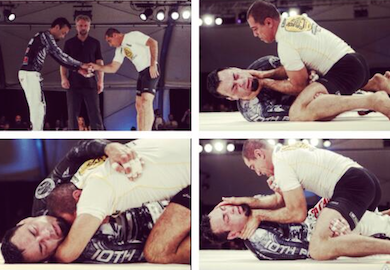 I don’t even know what’s going on with the Gracie family following Metamoris 3, but it’s becoming hard to be a fan.

Eddie Bravo dominated his match against Royler Gracie, beating the Gracie Jiu Jitsu practitioner for the second straight time, but BJJ’s first family isn’t acknowledging that fact. Not even a little bit.

It’s strange and off-putting to say the least, but I don’t believe they’re actually fooling anyone.

Eddie does a good job defending himself, here’s some of the more memorable interactions he’s recently had:

Thank you Gracie Mag for your incredible completely un-bias choice in action pics of my match at Metamoris!! pic.twitter.com/4DJB0HU3hi

Yes “@eddiebravo: Ryron Did your match with @Galvaobjj go thru the Helio Gracie filter? On ur "Breakdown" u & @RenerGracie said mine didn't.

@eddiebravo your match / tech was beautiful. It's only the Deep Half concept that presents concerns in a fight (eg. UFC FN 38).

Don't get it twisted. I RESPECT every style of #JIUJITSU that exists. I just stand firmly behind mine. #Graciejiujitsu