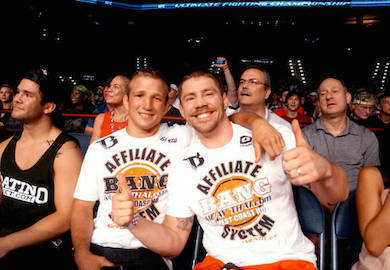 Ahead of the rematch in Sacramento with former UFC bantamweight champion Renan Barao, newly minted champion T.J. Dillashaw will be living with his coach, Duane ‘Bang’ Ludwig.

Having recently left Team Alpha Male to pursue his own ambitions, Ludwig is back in Sac-Town ready to get another UFC strap for his fighter.

The Caption Reads, “Just picked up my roommate at the airport. Not only is he great help around the house but he can teach you to be a bad ass! Not hard to tell but wonder who that could be?”