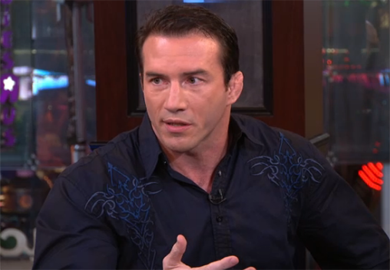 Until all fighters are worth millions (never going to happen) the topic of fighter pay will always be here. I mean, who’s really happy with what they make for a living? More is always better.

UFC veteran, Nate Quarry, took to the Underground forum earlier this week to debate the topic and give his side of the coin (which we covered intensely) and now we have some new insight from the former UFC middleweight title challenger.

In a great interview with Bloodyelbow.com’s Steph Daniels, Quarry continued his tirade over fighter pay.

“I always make a reference to my title fight against Franklin. I ask people, ‘What do you think a title fight main event, in the MGM Grand on Pay-Per-View will get you?’ People usually guess about a million dollars. I got paid $10,000. No Bonus, no nothing. When I lost, I went back to my original contract of $5,000 to show and $5,000 to win. People are shocked by that. They can’t even comprehend it. I didn’t know any better. My representation was Team Quest. None of those guys knew how to even read a contract, let alone negotiate one. When I came back after my back surgery, they were putting me back on $5,000 to show and $5,000 to win, and I told them I just couldn’t do that. So they bumped me up to $10,000/$10,000 and I fought Kalib Starnes and Pete Sell for that pay. Then I called them up and I said, ‘I can’t do this. You’re paying me so little and I have a little girl I’m trying to put through college. There’s so much wear and tear on my body for such little money that I’d be better off doing just about anything else.’They gave me a raise, which was much appreciated, and at the end of my career I was happy with the money that I was making. It wasn’t bench riding NBA player money, but it was better than I ever expected, and I was very grateful for it.

The more money the UFC pays to the fighter, the better the fighters they’re going to have. I’ve known plenty of guys who have said, ‘It’s so embarrassing that I’m bartending between fights just to get by.’ If they’re not working as bartenders, how much better prepared would they be for their fights? The fans would get better fights, and the fighters would feel more comfortable. People generally don’t perform well when they’re scared for their jobs. They want to know that their jobs are secure. That even if they have an off night, they’re safe, because the company cares for them. Dana is famous for tipping his wait staff at the restaurants tens of thousands of dollars, so it would be better for your long term career to serve Dana drinks than it would be to fight for him.”