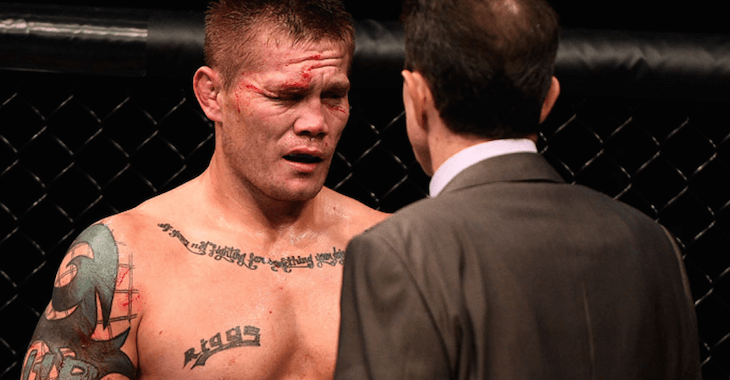 During a head scratching moment at UFC 191 on Saturday night, UFC veteran Joe Riggs was given a win via DQ.

His opponent, Ron ‘Choirboy’ Stallings, was disqualified for an illegal up-kick. Not so confusing right?

Well, in the first round Stallings hurt Riggs with a punch. It hurt his eye and he kept grabbing at it. In between rounds he clearly told his corner that there was something wrong. The corner told him he was fine and he continued to fight. In the second round he dropped Stallings early and went in to try and finish. Even on the ground while trying to finish he kept grabbing at his eye. Then the up kick happened and on the replay it showed that it clearly hit him on the jaw.

When the referee stood him up he started saying it hurt his eye. The doctor checked and Riggs said he couldn’t see. The referee stopped the fight, DQ’ing Stallings.

Here’s what Riggs had to say about the situation:

“I had surgery on my eye a couple years ago. Sometimes I get poked in the eye when I spar. In the first round, he landed a couple jabs that weren’t hard. It was just kind of leather getting in my eye, so it was kind of bothering it.

“Second round, when I was on top of him and landing those big shots, he threw a kick up. I thought it was his heel, but on the replay, it looks like the side of the foot going into my eye.”

“It sucks the fight had to go that way, I wish it didn’t. I felt really, really good. I wasn’t tired. I was obviously dominant in the fight. He’s a tough guy. I hit him with some big shots. Hats off to him.”