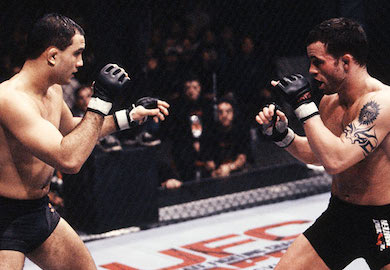 Retired Two-division UFC champion, BJ ‘The Prodigy’ Penn has had many great rivals in his storied career as a prize-fighter.

However, his first, and probably most memorable, comes in the form of former UFC champion, Jens Pulver.

In a recent interview with MMAJunkie.com, Jens discussed his thoughts on the recently retired Penn’s last fight and decision to hang-em-up.

“What got to me watching that was, I understood. It’s the hardest thing to realize when you’re in there, because in your mind you’re like, ‘I can do this.’ But once you’re in the fight, it’s like you’re not doing anything. That was the hardest part for me to watch. I was looking at him in that fight and going, ‘I get this. I know that feeling.’ Nobody told us how to get old. Nobody told us what getting old was supposed to feel like. There’s no magic switch where it all shuts off.”

“I know what he’s going through in his mind. After all the battles, he’s going, ‘Man, one more time. Let me grab somebody and knock them unconscious. Let me submit one of these kids.’ And it just doesn’t happen come fight time. I’ve been there.”

“I wish there was some kind of book, the ‘getting old’ book. I wish there was a playbook for it. Because you’re sitting there thinking, ‘Why can’t I do what I did?’ You’re looking at this road in front of you, and suddenly it’s dark. Athletically, it’s over. It’s done. What are you supposed to do? It’s getting easier. I’m trying to replace it with other things. I have my family, my kids. I’m doing coaching, these other things I always wanted to do. I got over the scary hump of the idea. And now, watching B.J. facing it, it’s just … it’s time.”