On November 2, the Bellator Fighting Championship attempted to enter into the risky business of pay-per-view broadcasting.

After removing the main event between Tito Ortiz and Rampage Jackson the promotion went back to their free on SPIKE TV business model and removed several notable bouts from the night’s roster.

An epic title fight between Eddie Alvarez and Michael Chandler headlined the fight card and saw Alvarez crowned the new champ of the promotions lightweight division.

Taking all things under consideration, we asked our audience here at BJPENN.COM if you guys thought the event delivered for fans. 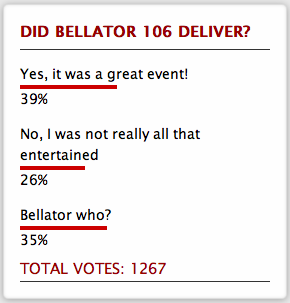