13,000 people took part in last week’s BJPENN.COM poll, asking fans if Ronda Rousey was still worthy of your devotion as a fan.

Following her stint on the UFC’s hit reality series, ‘The Ultimate Fighter’, many fans believe that Ronda Rousey is no longer the picture perfect poster child for women’s MMA.

Internet chatter would make one believe that she is in fact hated by the fans of the sport, which is why, following her stint on TUF, we asked fans this very important question. 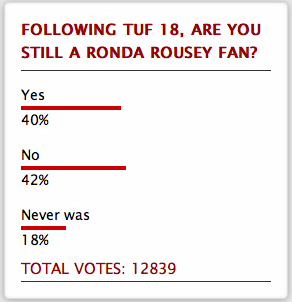