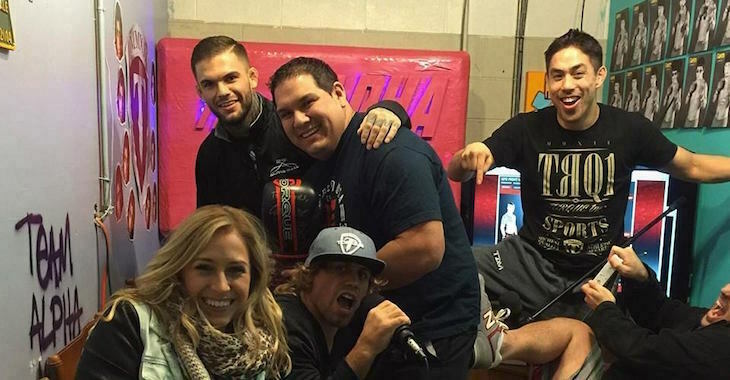 On Thursdays episode of Stud Show Radio (formerly Team Alpha Male Radio) hosts Justin Buchholz and Chris Carlino aka Sir Studboy were joined by a few other fighters from TAM. The group took calls and discussed the latest MMA news and events.

One such caller asked their opinion on the rumor that UFC heavyweight Brendan Schaub is considering moving down to the light-heavyweight division. Check out what Studboy had to say:

“I think he’s moving down because he’s afraid of me. I called him out for the Metamoris professional grappling match but he don’t want none of this.”

“I think he should step up to the challenge and face Sir Studboy at a Metamoris or I don’t know, we don’t need Metamoris, we’ll put that on right in the gym. We can put that on up here, but he’s to scared to challenge me. I’ll come out in my traditional strong man outfit, it’s like the singlet with the one strap over it and stuff, and I’ll sub him pretty quick.”

Who wants to see Stud Show Radio vs. The Fighter and The Kid in a podcast grappling match?