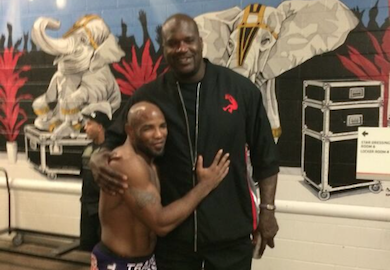 The UFC’s first trip to Orlando, Florida, will go down as a smashing success.

UFC President, Dana White guaranteed the promotion’s return to the Central Florida city, following a successful gate and support from the local community.

One Orlando citizen was more welcoming than most. Four-time NBA Champion, Shaquille O’Neal rolled out the red carpet for his friends at the UFC.  The basketball mega-star hosted the UFC on FOX 11 pre-fight presser from his mansion, The Shaq Center’ and was available all night, Saturday, for photo ops.

Damn I look like a lil kid next to @SHAQ pic.twitter.com/1Sj5eiMrfJ

Incase you were wondering, @SHAQ and I are not the same size pic.twitter.com/ugxFb6u0AU